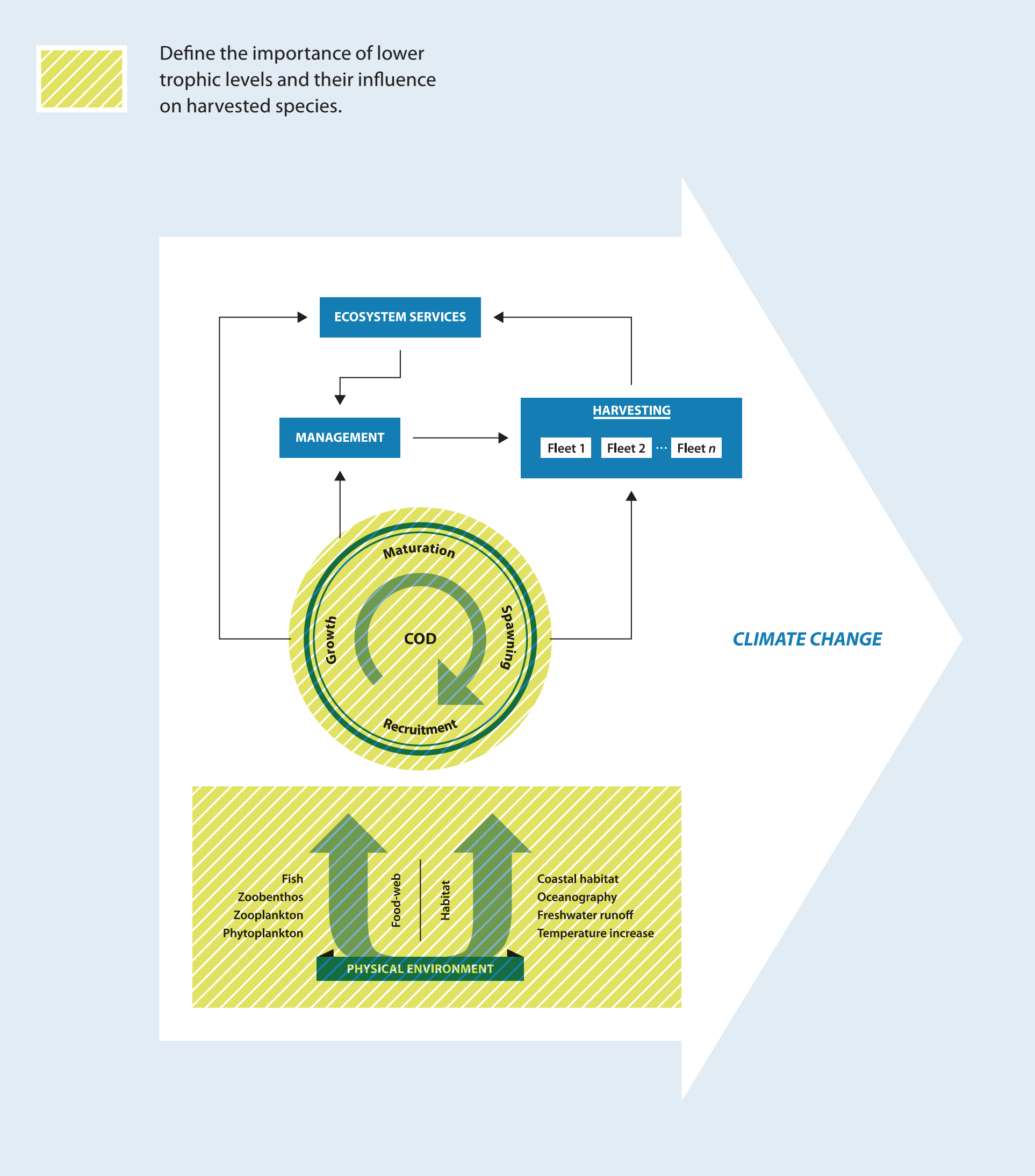 Fiksen Ø, Jørgensen C. 2011. Model of optimal behaviour in fish larvae predicts that food availability determines survival, but not growth. Marine Ecology — Progress Series. 432:207–219. Relevance: To understand how such spatial and temporal gradients will influence future recruitment success in cod stocks, we need quantitative models of the behavioural response of the early life stages. Here, we have developed a model that predicts larval cod survival in environmental gradients — and show that the effect of food availability will be seen in predation rates rather than in growth rates.

Pécseli HL, Trulsen J, Fiksen Ø. 2012. Predator-prey encounter and capture rates for plankton in turbulent environments. Progress in Oceanography. 101:14–32. Relevance: Among the physical variables that is predicted to change with climate are wind and precipitation. Both of these factors influence turbulence in the ocean. Here we have thoroughly reviewed and modelled how turbulence influence the contact rates in planktonic organisms. These models are necessary to translate from environmental change to foraging and predation in plankton models.

Reglero P, Urtizberea A, Pérez A, Alemany F, Fiksen Ø. 2011. Cannibalism among size classes of larvae may be a substantial mortality component in tuna. Marine Ecology — Progress Series. 433:205–219. Relevance: A zooplankton diet is shown to be frequently insufficient to sustain larval fish growth, thus piscivory in species with cannibalistic behavior, such as cod and tuna, is likely to be a major source of larval mortality.

Hidalgo M, Gusdal Y, Dingsør GE, Hjermann D, Ottersen G, Stige LC, Melsom A, Stenseth NC. 2012. A combination of hydro- dynamical and statistical modelling reveals non-stationary climate effects on fish larvae distributions. Proceedings of the Royal Society of London — Biological Sciences. ISSN 0962-8452. 279(1727):275–283. doi:10.1098/rspb.2011.0750 Relevance: We found that the spatial pattern of larvae changed over the two climate periods, being more upstream in low North Atlantic Oscillation years. We also demonstrate that spawning distribution and ocean circulation are the main factors shaping this distribution, while temperature effects are different between climate periods, probably due to a different spatial overlap of the fish larvae and their prey, and the consequent effect on the spatial pattern of larval survival. Our new methodological approach combines numerical and statistical modelling to draw robust inferences from observed distributions and will be of general interest for studies of many marine fish species.

Swalethorp R, Kjellerup S, Malanski E, Munk P, Nielsen T. 2014. Feeding opportunities of larval and juvenile cod (Gadus morhua) in a Greenlandic fjord: temporal and spatial linkages between cod and their preferred prey. Marine Biology, 161(12), 2831–2846. doi:10.1007/s00227-014-2549-9 Relevance: This paper highlights the patterns on dietary contribution to cod, giving an idea about the prey size spectrum they are predating on. Also, it shows the qualitative importance of taxa on the fjord studied. In this way, predictive models could use our description to verify the match-mismatch between prey and cod, and then describe possible surviving rates with the changes are going to happen around Greenland caused by the climate. Other possibility would be related to the capacity of cod remove plankton in that size spectrum, in the case cod is there. Furthermore, that fjord is related to the highest cod stock in Greenland. Changes there are most likely to affect cod stock (positively or negatively), and consequently our description would cover the early life history stages of this species to the understanding of this system.