A week in archipelago with the Baltic Sea models 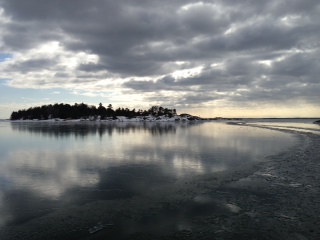 1. The Baltic Sea in March

Having a very method-based PhD project and working with network analysis I’m clearly interested in different ways to study a system and especially in the interactions and flows between its different parts. Increasing attention in science has been given to models as an important instrument for modern day research (Frigg & Hartmann, 2012). Models serve science in two ways: a model can act as a representation of a selected part of a world, or it can represent a theory by interpreting its laws and axioms (Frigg & Hartmann, 2012). Scientists spend a lot of time on building, testing, comparing and revising models, which can also be seen in the journal space given to articles on modeling tools (Frigg & Hartmann, 2012). Consequently, several models exist and the question is: which one should you choose for your study question?

Last week I took a boat to Askö field station (Sweden) for an intensive study week on the Baltic Sea models, “Modeling as a tool to study the Baltic Sea ecosystem - Possibilities and challenges”, organized by the BEAM strategic programme at the Stockholm University (Baltic Ecosystem Adaptive Management (http://www.smf.su.se/beam). The course gathered model-interested PhD students and Post docs together with accomplished researchers, who gave lectures on a large number of different model approaches.

The North European Baltic Sea is a fascinating marine region due to its one of a kind combination of ecological, biogeochemical and physical factors and extensive anthropogenic impacts. It is a brackish, salinity-stratified sea with restricted water exchange with North Sea. There are shallow sills and deeper areas, as well as a low number of species diversity. Some of the species have been adapted specifically to the Baltic Sea’s extraordinary environmental conditions. The sea is heavily affected by a number of human impacts including eutrophication with symptoms such as anoxic bottoms and future climate change with significant changes in temperature and salinity. The sea is managed in co-operation between all the Baltic Sea states and EU.

During the course we learned the pros and cons of different marine models ranging from food web models, biogeochemical models and trait-based models to spatial distribution and statistical modeling, many of them applied to the Baltic Sea. On the daily basis, discussions took place over the applicability of different models, how to compare models to reality, how to manage marine resources and the possibilities of linking the models to one another. Exercises gave us taste of how to build a model, how to interpret the results, and the kind of practical problems you might face.

With all the models and in all discussions, one topic kept on reappearing: the knowledge gaps in the Baltic Sea research. Even if the Baltic Sea is one of the most studied seas in the world, we still don’t know enough – a good reminder of the complexity of marine systems. Nevertheless, the process of modeling the Baltic Sea and the model results have major benefits for researchers: the models increase system thinking, clarify relationships between different parts of the systems, produce tools for different scenarios, reveal information gaps, identify research priorities and forces co-operation between different disciplines. The disadvantages include, for instance, different levels of uncertainty in model results and possible mismatches in temporal and spatial scales. 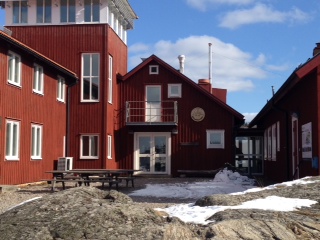 2. The main building of Askö Laboratory

Altogether, the course week at the Askö Laboratory was very giving and thought provoking. In addition to lectures, brainstorming for future collaboration and highly valued face-to-face discussions with the lecturers, we had time for speed presentations of our own projects, playing “Kubb” (Swedish lawn game with wooden blocks and sticks) in snow, sauna and winter swimming. The course made me understand why models get so much research attention: they are very usable thought experiments both for science and resource management. So, what to think when choosing a model to use in your study? I would argue that one needs to give a careful consideration for at least three things: (i) model output and relevant parameters, i.e. is the model really answering Your question, (ii) do you have enough and right kind of data as input, and (iii) how much uncertainty in the results can your project deal with. I also learned that the real world always has surprises in store to startle the modeler with, and that there still are plenty of unsolved questions in the Baltic Sea system to keep us, the next generation of marine researchers, busy with work.

E-mail this page
>
A week in archipelago