The advantage of having two nodes in the same country is that, while visiting your exchange node you also have the possibility to spread out further and see what is going on in the other node as well. This is exactly what Giovanni (Oslo-Node) did during his 3 month stay in Finland at the Helsinki-Node. We (Giovanni and Benjamin) shorthanded organized a seminar day at Åbo Akademi University, the “home” of the Åland-Node, to get updated insight of what has been and will be going on since we’ve last met during the NorMER annual meeting in Reykjavik in October last year. 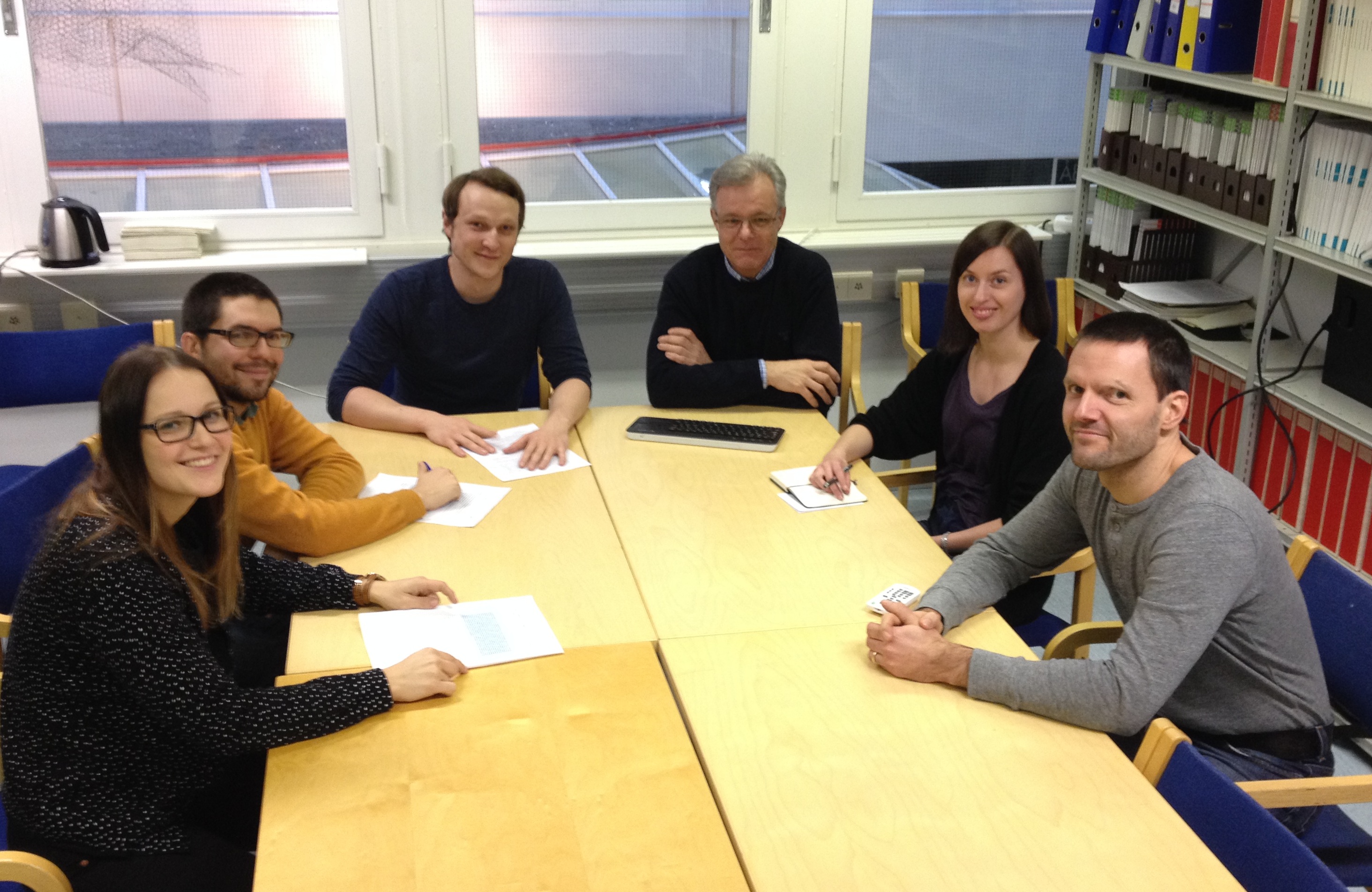 Erik, the node-leader, started by giving an overview of what the benthic ecology group at Åbo Akademi (almost all of them NorMER members) is currently working on and in which projects the group is involved in. Then Giovanni presented his work on Ecospace, the ongoing effort on the bio-economic model of the North Sea cod, and the tasks he wants to achieve during his exchange period. Martin showed the results of the now submitted manuscript on the shifted impact from eutrophication to climate change on fish and zoobenthos in coastal waters. Marie gave insight into the talk she gave at the Ocean Sciences Meeting 2014 in Honolulu, Hawaii, entitled; Macrozoobenthic Functional Diversity within a Food-Web Framework. Anna gave an overview of her PhD thesis, Validating the Biological Trait Concept, as this was shortly before her dissertation. And Benjamin presented his results on the environmental drivers behind long-term benthic progression patterns in coastal areas.

After the stimulating discussions of an insightful meeting with the whole group, we kept discussing about tasks of both our own projects as well as on the new NorMER Young Researcher project and about NorMER in general. Rather than reporting some of our ideas and points here, we thought about a different kind of blog entry this time. So we came up with some question relevant to NorMER, that we found interesting to think about and to answer. We gave each other some weeks time and answered independently from each other. Here is what came out of the very first NorMER double interview:

What do you think is the biggest challenge of marine systems' management to adaptation to climate change today?

B.W. Adapting to a changing environment where the specific development is to some degree uncertain, and the outcome so complex, is a great challenge. Especially with certain factors taking a few more decades till they manifest and show their entire range of effects on marine communities. I think realizing, that now would be the time to prevent or to minimize further effects is a good start, which still is a challenge for some institutions and governments. Filling the gap between research findings and their execution by stakeholders and decision makers is another challenge. And once there are action plans in force, I believe another task will be to assess more system specific management strategies, considering different (sub-) systems requiring different approaches in regard of setting thresholds and reference values to aim at, and shouldn’t be managed as one large system with equal treatment plans everywhere.

G.R. I believe that the biggest challenges to adaptation are from one side in the integration of different fields of science into a coherent strategy for holistic adaptation, and on the other side in the communication between science and other sectors of our society. I think that there are still resistances from the society to the trade-offs, which are needed in order to cope with a changing world. Unfortunately, we need to face the fact that communication between science, management and society is still ineffective in this sense.

How do you think NorMER is contributing to the development of knowledge that can improve the way we manage marine resources?

B.W. It’s doing it through its interdisciplinarity. I think connecting the dots across thinking-boundaries and limits of expertise is the key here. The framework of NorMER is taking it one step further than just looking at a direct, single implication on your specific research, by linking various connected aspects. Taking the example of cod, looking at fisheries management strategies and setting sustainable catch quotas is one important point of course. But for a successful management it is also necessary to consider and investigate the influence of environmental drivers on the physiological performance of adult individuals, their egg and larvae survival, abiotic and biotic drivers influencing its food resources in different systems - coastal and offshore, setting efficient MPAs, distinguishing and considering subs-stocks from a population… These points, and more, are all covered within NorMER.

G.R. NorMER is contributing to create knowledge through the many important projects that all of us are working on for our PhDs and PostDocs. But, more importantly, NorMER creates synergies: this unique experience allowed us young scientists to practice interdisciplinarity, by discussing common problems and comparing the respective approaches. Interdisciplinarity is a buzz-word today, a much sought-after approach for management. However, there is a lack of practical examples of effective interdisciplinary science and, especially, management for marine socio-ecological systems. One of the reasons is in the difficulties to communicate between scientists coming from different disciplines. In NorMER, we are learning to work with each other in a complementary way, to understand each other’s points of view and, where necessary, to find common ground. This is the biggest contribution that NorMER could ever give to the management of marine resources.

And how is your specific project contributing?

B.W. It’s one piece of the puzzle that helps revealing the big picture. I think there is a plurality of aspects contributing to successful management of marine resources as I just mentioned above. I, in particular, am trying to evaluate the role of benthic fauna in the coastal food web under increasing environmental stress in coastal areas. I want to find out in which way the effects of climate change are driving zoobenthic communities and how this could influence its functional role for the ecosystem, especially as food resource for fish.

G.R. My project is a good example of interdisciplinary work in itself. I have a background in ecology, and in my work I combine my knowledge with that of economists to develop a bioeconomic model. These types of models are often used by resource economists, however they are sometimes criticized by ecologists for the simplification of the biological component. In my model, I am trying to add ecological realism and reduce the economic detail. My aim is to find a trade-off where the model has enough realism and enough simplicity in both disciplines to be valuable for everyone. More prosaically, my project is contributing to build bridges between the two disciplines, promoting the bioeconomic approach among ecologists, and providing economists with my know-how in ecology.

How do you expect the management of marine ecosystems, and academic research about it, to change within the next 15-20 years?

B.W. I think that NorMER is actually going in the direction of what will become even more popular and also needed in the future. I am hoping for more interdisciplinary research approaches, which might be coupled more tightly to active management actions. My optimistic expectations are going towards approaching complex research challenges, involving multiple factors and drivers, by a set of specialists who work hand in hand with a general understanding and openness across disciplines.

G.R. I expect that the management and research will be more and more synergic: management will rely more on scientific advice, and will move toward sustainability; contemporarily, scientists will learn what type of advice managers need, and communication will improve. A stronger linkage between science and management has already been the trend in the last years, at least in Europe, and I expect this trend to be maintained. At the same time, new challenges will emerge: contrasts in resource uses will grow, and I expect the importance of marine spatial planning to increase. I also believe that there will be a larger inclusion of socio-economic considerations and interdisciplinary approach in the management of marine systems. I believe that NorMER will be a milestone in this respect, by forming and inspiring young scientists with the capability to make a long-lasting impact in science and management of marine resources.

Who is your favorite NorMER member and why?

B.W. Well this question is obviously impossible to answer! Even picking a single Node would be too hard as NorMER is packed with really nice people, seriously. Many colleagues have already become friends.

G.R. This is a difficult question: there are many interesting characters in NorMER, both from scientific and human perspective, and I am very fond with many of them. However, if I have to choose one person that makes NorMER special, I could only think about Jason Whittington. Not only because he is the mind and heart of NorMER, promoting and organizing most of the logistics and administrative work; not only because he is a source of inspiration and motivation in scientific work and a strong supporter of any bottom-up ideas that the young researchers have; not only because he is a point of reference whenever there is a problem or need. What I appreciate the most in Jason is that, on top of this, he can always find the time for a friendly chat, after the hard work is done. And that’s when he comes out with his funny, strange, and sometimes almost unbelievable stories: from the penguin-hugging course that he took before fieldwork in Antarctica to that time when a season of data was lost because of a crazy monk smashing his samples… well, you should share a drink with him to know what I mean. Thanks Jason for your hard work. NorMER could not have a better Scientific Director!

What is the funniest thing that happened to you during a NorMER meeting?

B.W. Good question. Where to start? No seriously, the meetings are always fun, very intense as well but it becomes nicer and nicer to get together and see all the fellow NorMERiens again. There is one particularly funny event I associate with a NorMER meeting, although it was just before last years annual meeting in Reykjavik - still at the ICES ASC dinner. But it included many NorMER members. There was a really hilarious Icelandic stand-up comedian who made us laugh so much we cried tears! I wish I could remember his name…

G.R. Several amusing episodes happen during NorMER meetings, especially when we spend the small hours talking about science and research and beyond, sometimes with the cheeky help of some liquid fuel. I have to admit that these episodes tend to be funny on the geeky side. One funny episode happened at the Reykjavik meeting, when me and Alex Kokkalis where sharing a hotel room. For few days, we had been talking about an idea in the dead time: using an individual based model for estimating survival chances of a critically endangered species by simulating its movement and re-colonization. Alex was listing data and information needed for parameterization of the model, and suggesting that it would be difficult to obtain them. I was more positive and enthusiastic, probably being naïf as usual. We agreed that the whole idea was certainly useless, but that did not stop us: it was an interesting scientific challenge to be addressed through some fancy model, and that was enough for us! In the middle of the discussion, we heard some banging on the wall, followed by a loud “Shut up, I want to sleep!” (there were other words I can’t report here). We realized it was almost 1:00 A.M. and the walls of the hotel room where thinner than we thought. Alex and me stared each other in our eyes in silence for a moment, then we shook our shoulders and agreed that it was quite late. There was only one thing to do, and we did it: we kept on discussing. 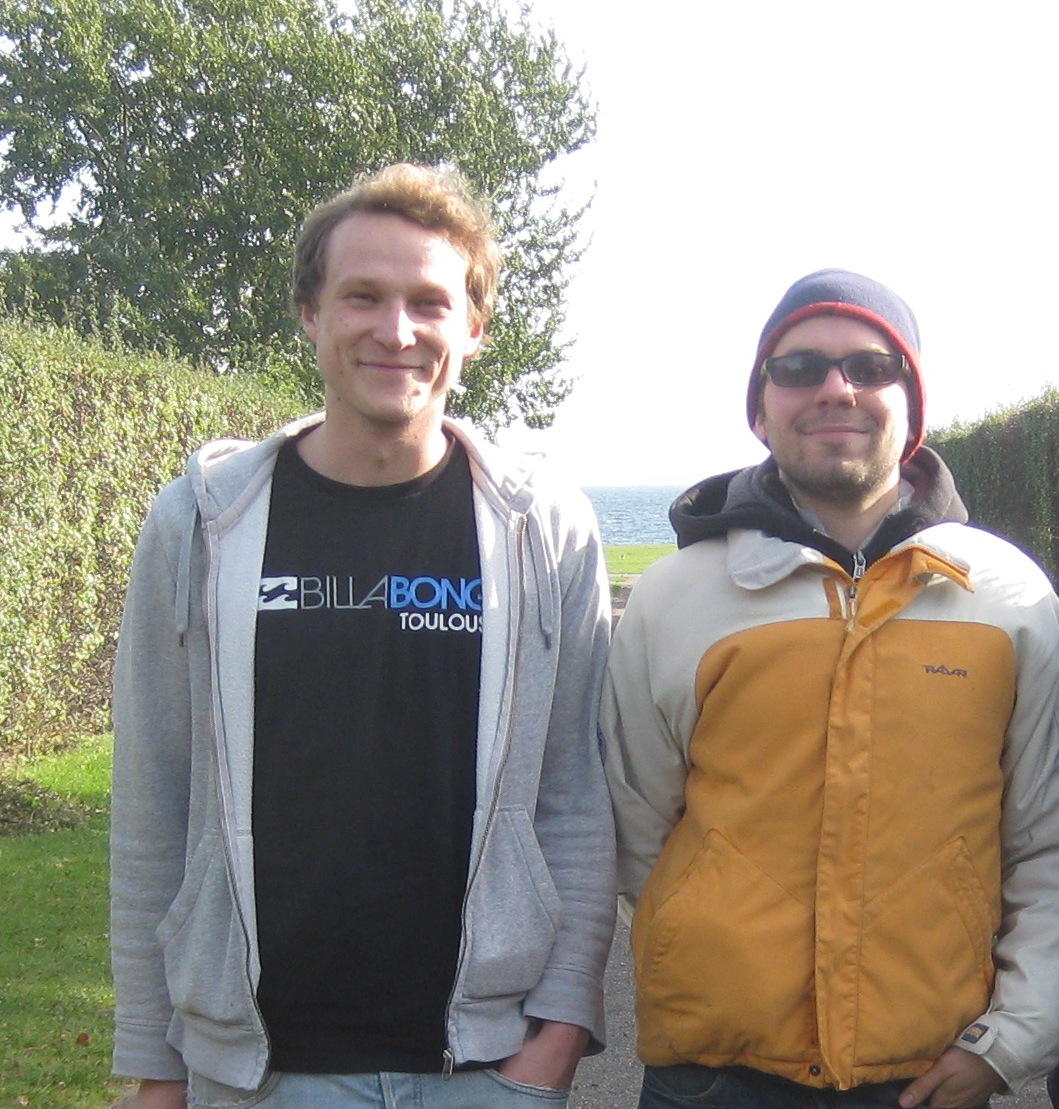 By Giovanni Romagnoni and Benjamin Weigel