Climate change can have many impacts on our oceans; it can cause changes in oxygen concentration, ocean chemistry, water stratification as well as ocean circulation patterns. However, ocean warming is the most important factor causing changes in fish physiology, how fish function, as well as fish behaviour. If you think of an individual fish, temperature can influence the energy that the fish can use to breathe, swim, digest food, grow and reproduce, and because it affects so much, increased temperature can affect survival and have consequences for fish populations.

We are interested in cod; in particular the North-East Arctic cod stock that lives in the Barents Sea, where the current mean temperature is 4°C. Cod are described as having “slow life-histories”, they grow slowly at around 10cm per year and adults are often larger than 1m, they start reproducing at 6-10 years of age and may live up to 25 years; because of these characteristics they are more sensitive to mortality. North-East Arctic cod are a very important stock in commercial fisheries and there is extensive experimental and survey data available, making them an ideal species to study. We know from this existing data that increased temperature can cause increases in fish length and weight, changes in growth and maturation, and have both positive and negative effects on spawning, but how do we know if these trends will continue into the future? To find out, we need a computer model.

We have developed a new computer model to try and predict how North-East Arctic cod will respond to increases in temperature, for example how their growth rate, age at maturation, and foraging behaviour will be affected. Fish are complex organisms, so to build a computer model that represents this cod stock we have to include many different parts. To do this, we use an energetics approach (Fig 1). 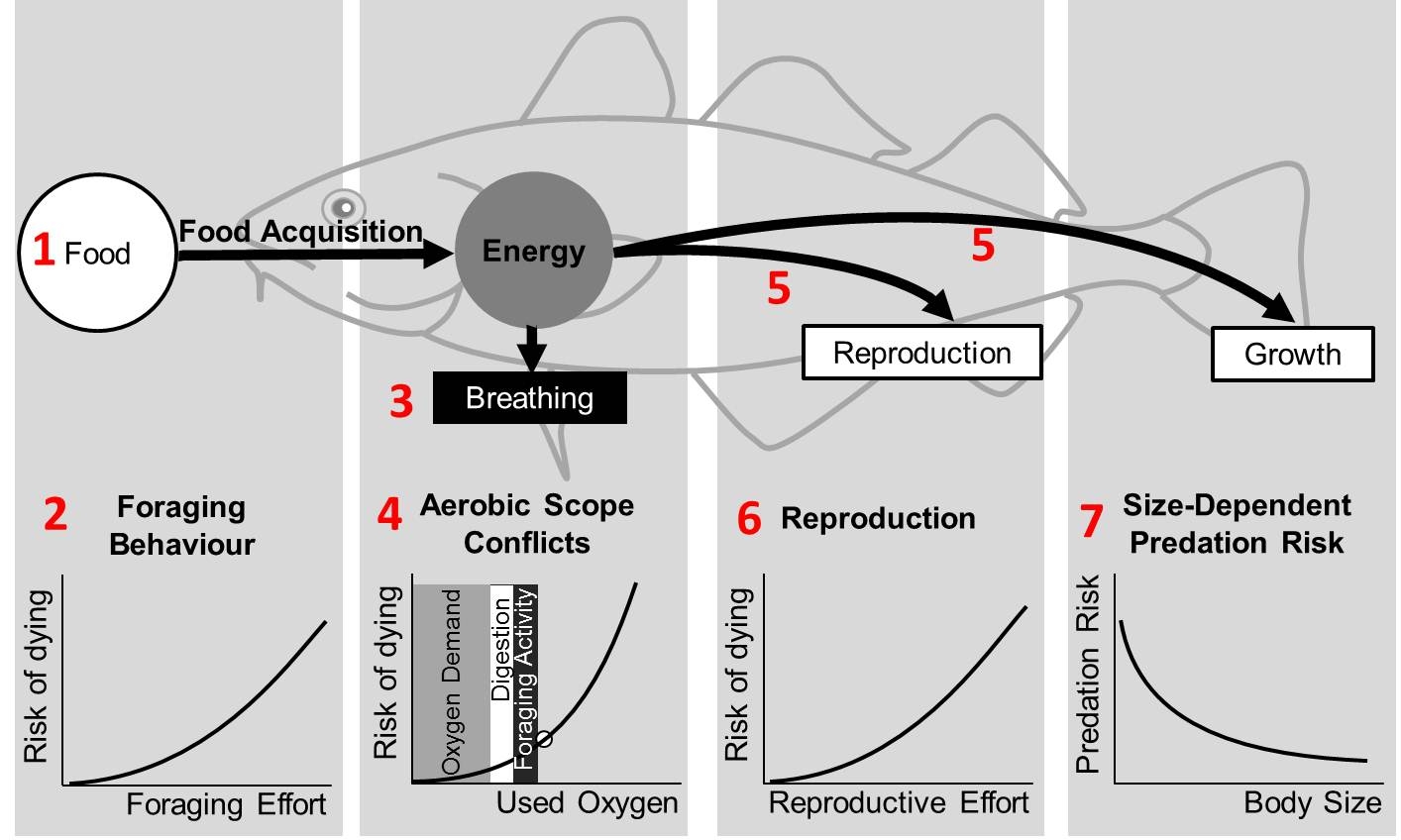 For fish, the minimum amount of energy needed to sustain its life is called the standard metabolic rate, its oxygen demand (Fig. 2). The maximum amount of oxygen it can uptake from the surrounding water is called maximum oxygen uptake, its oxygen supply; the difference between these two is called the aerobic scope. Additionally, the foraging that the fish did earlier to find food costs energy, so does digesting this food which uses some of their aerobic scope. This is very important because any aerobic scope left is what the fish can use to grow and reproduce.

Now what happens to all of these processes when temperatures change? The energetic costs of breathing increase with increasing temperature which in turn makes foraging and digestion more energetically expensive, and as a result the amount of aerobic scope available for growth and reproduction also changes with temperature (Fig. 2). This then can have implications for behaviour, mortality and the life-history strategy.

To program the computer model we use a method called dynamic programming, which allows us to encompass all of the aforementioned energetics, behaviour, mortality as well as increases in temperature to predict how climate warming may affect the foraging behaviour, growth, age of maturation and survival of adult North-East Arctic cod. This type of programming finds the optimal or “best” response over several possible life-history outcomes, finding the life-history strategy that will maximise reproduction. This type of computer model is different to others as it encompasses not only fish physiology, but also behaviour and evolutionary considerations, treating the organism as a whole.

Our predictions indicate a positive response to increased temperature for this cod stock, it appears that North-East Arctic cod do like it hot or at least warmer than today. When we run the computer model, increasing the temperature by 2°C, predictions suggest that growth rates and their size-at-age increase. We found that increased temperature should not affect age at maturation, but gonads were predicted to more than double in weight, not only because the fish were larger but also because their gonad to body size ratio increased.

When we ran the model over a wider range of temperatures, from 2°C to 7°C, fish were predicted to grow faster and increase the amount of energy that was used for reproduction at higher temperatures. We also found a very interesting behavioural response; they increased their foraging behaviour even though the risk of dying was high, to compensate for the increased breathing costs at higher temperatures. As a result natural mortality showed an increase with temperature. Even though these results appear positive, this is only the case if their food availability doesn’t change with temperature. If food levels were to decrease with climate warming, it may have dramatic negative consequences for the North-East Arctic cod.

By Rebecca. E. Holt
E-mail this page
>
Do cod like it hot?