Main navigation
Sub navigation
Blog > Adaptation, what to expect, when you are expecting?

Adaptation, what to expect, when you are expecting? 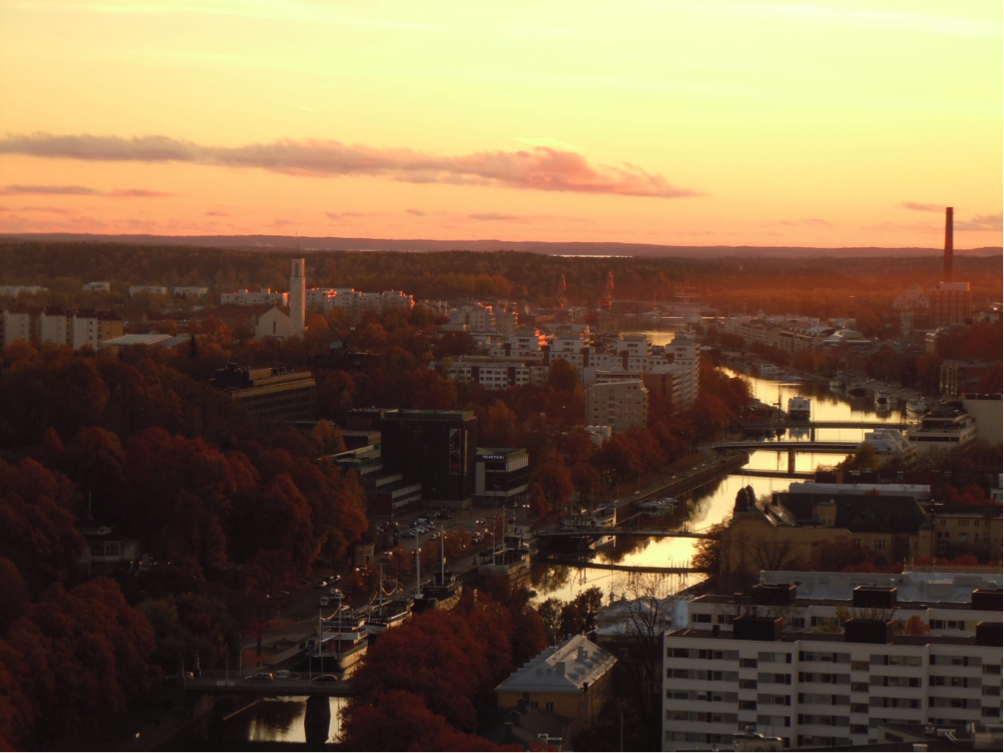 The river Aura which runs through the lovely city of Turku, Finland. Turku was this year’s venue for the annual meeting of our Nordic Centre of Excellence with the Science Advisory Board of Nordforsk. A small trivia: the largest passenger ship ever constructed, MS Allure of the seas, was constructed in a shipyard in Turku. Photographer: Benjamin Weigel.

I am back home from lovely Turku, this year’s venue for the annual meeting of our Nordic Centre of Excellence (NCoE), NorMER, with the Science Advisory Board (SAB) of Nordforsk. This year’s meeting was unusual, as several of the PhDs and Postdocs from three NCoEs were invited to give a short talk about their work, myself included. This was a welcome opportunity to meet both the SAB members, as well as people from the two other NCoEs that attended the meeting, Tundra and Nordstar. The all-important reason for this meeting, though, is to elicit constructive advice from the SAB members. As NorMER already specified in its 2013 report, the SAB has pointed out that two of NorMER’s goals seem to be lagging behind the others in terms of measurable progress. The goals in question were to link to industry and policy makers and to update marine ecosystem management policies in order to sustain healthy fisheries. In other words, we need to address the question of how the Nordic countries should adapt to the effects of climate change.

I am sitting on my sofa and trying to put into words my thoughts about the most important word of the meeting: “Adaptation”. What does it mean, how is NorMER approaching it in our work and how must it be addressed? What follows are my views on the word “Adaptation”, and I am going to explain it by giving you a little insight into my own world. Perhaps this approach is due to the fact that I come from a small town in Iceland, called Selfoss, meaning that I am therefore Selfish, just as people from Ireland are Irish, and so I like to talk about myself. I will write this also with the aim of all Selfish people to understand so it will be written with a minimum of scientific jargon. 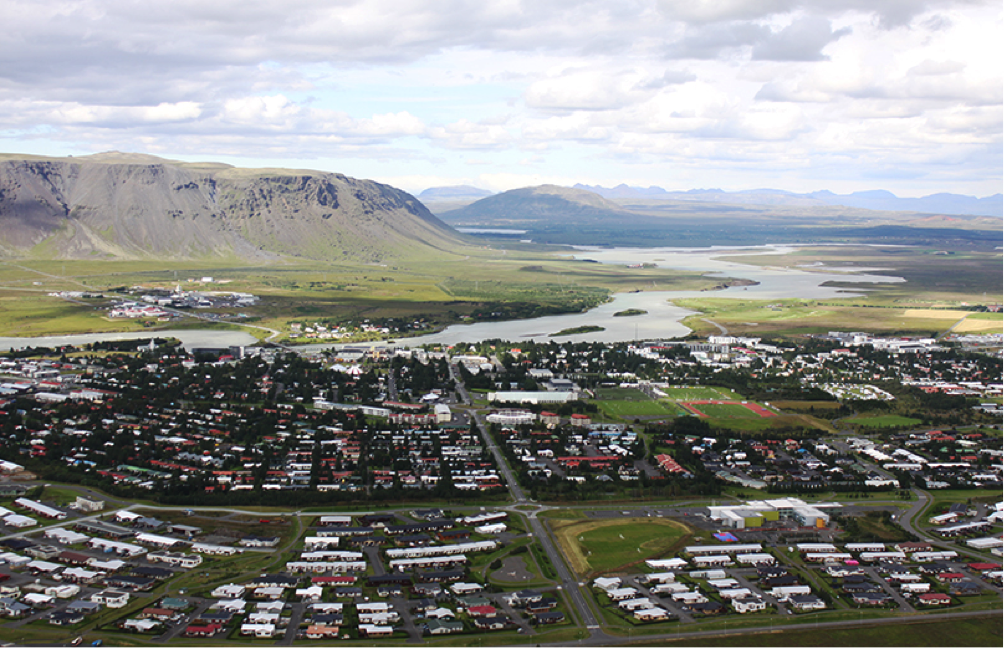 My hometown Selfoss, south of Iceland. The river Ölfusá, which carries most water volume of Icelandic rivers, 384 m3/sek, runs through Selfoss and feeds into the Selvogsbanki area at the south coast of Icleand. Selvogsbanki is the most productive spawning area for cod around Iceland.  Selfish people can be very nice and open when you get to know them and just imagine there are only about 7 000 Selfish people in the World. Photographer: Guðmundur Karl Sigurdórsson

As I mentioned earlier, I am sitting in my sofa; it is a light grey sofa that my wife and I bought just as we moved into our new and small apartment in the capital area of Iceland. The sofa has, however, lost its glory and is now not as springy as it used to be, and due to uncountable stains the colour has changed from light grey to having 50 shades of grey. The sofa was used by me while watching soccer games and by my wife for reading an Icelandic version of BoBedre, but currently it is keeping five Barbie dolls company. The soccer games have had to give way to Disney movies featuring Mermaids, Lion Kings, and a honey eating bear that has a melancholy donkey and a hyperactive tiger for friends. Most recently the television is constantly broadcasting the story of two sisters from Arendelle (Arendal), Norway, who have some issues with freezing water, but everything works out nicely in the end. The sofa is not the only piece of furniture in my home that has changed its role. The sofa table used to be mostly empty, occasionally supporting a coffee mug and perhaps a copy of the Economist, but is now full of drawings of butterflies and flowers, pages full of first attempts at written letters, crayons, and more Barbie dolls. The same goes for the living room that used to pride itself only on a more than 14 year old, 21 inch cathode-ray tube television. Now its floor is occupied by an expensive Norwegian Simo baby stroller and a kids replica of an IKEA kitchen. And last, but not least, the bedroom, in which my two princesses are currently sleeping, holds such an impressive variety of toys that the biodiversity in an Amazon rainforest pales in comparison. Oh, and somewhere there is a lonely Ken doll, please return if found. I think he has fled, as he is one of those people who cannot accept the fact that the world has changed and that business as usual is not going to work. Ken needs to accept the fact that he and I are now living in a Woman’s World. Do not get me wrong, I like my new scenario; you could even say that I love it. But what is important about my story is that my wife and I were very well prepared. We knew that this was going to happen, we were expecting this change in our world, and it is safe to conclude that:

We have adapted to this new scenario.

The key to this adaptation was preparation by attending seminars on parenthood and by reading textbooks on the same topic, especially the #1 bestselling book on pregnancy: What to expect when you are expecting by Heidi Murkoff and Sharon Mazel. With these kinds of books I understood what a parent can expect during 9 months of pregnancy, and what to expect during the first years of my children’s lives. When I can expect my daughter to be afraid of losing her mother, therefore, showing fear of unknown people, especially bearded men. When I could expect long, exhausting nights due to expected hormonal changes and brain development, as well as teething. It is this bestselling book that came to mind when the SAB stressed that NorMER must deliver on their promise of how to adapt fisheries in the Nordic Region to climate change. That NorMER must produce a legacy by which it will be remembered, a legacy that should encompass all the great scientific work that has been carried out by NorMER. To put this in perspective, the SAB wants NorMER to produce the key for policy makers to adapt their strategies and fisheries management to prepare them for those new scenarios which may be expected due to climate change. So, like my family, the Nordic countries could conclude that:

They have adapted to a new scenario.

So, it is quite clear in my mind. NorMER must deliver a product that should provide advice that will guarantee a good, sustainable, well informed, and well prepared response to a scenario which may reasonably be expected due to future climate change. Although in many ways this is far more complex than writing a textbook about an everyday phenomenon such as expecting a baby, I still believe that NorMER will achieve this. By bringing together the expertise of leading research groups from all the Nordic countries, by implementing a collective and multidisciplinary research strategy to explore the biological, economic, and management consequences of global climate change on fisheries resources. NorMER will also continue its efforts to engage with industry and policymakers, it will reach out to ICES and other EU groups, and it will ensure that PhDs become directly involved in policy planning. Also it plans to publish syntheses incorporating all the work that has been produced within NorMER and an effort will be made to translate it into a common language that is understood by all stakeholders, so that the important guidelines of our work will not be lost in translation. We can discuss the form this product should take, it could be a scientific paper, a textbook or a white paper called: What to expect, when you are expecting climate change. Or perhaps something completely different, and who knows, perhaps it may also become a “bestselling” product.

It is also very important that we realise that adaptation doesn’t begin and end with the work of the three NCoEs, NorMER, Nordstar and Tundra. We need to continue our work and increase our knowledge on the adaptation of ecosystems, economics, and social aspects in relations with climate change. I want to finish by quoting the Danish Minister of Higher Education and Science, Sofie Carsten Nielsen, when discussing the spotlight that the Danish government is shining on Open Access, this is from an interview with the Nordforsk 2014 magazine p. 51.

“… The key idea is that we can best solve societal challenges – and for me this is the most important aspect – by getting as many perspectives on them as possible, and by having the best possible basis for taking well informed decisions. I am certain that the more knowledgeable we are, the better decisions we will take.”

I could not agree more! 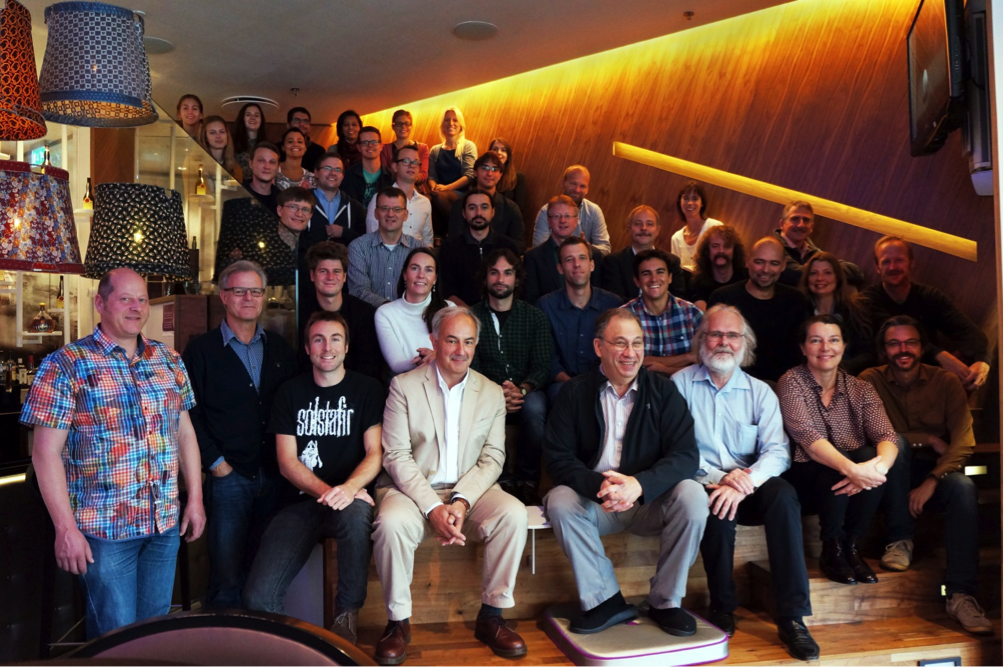 A NorMER group picture during the annual meeting 2014 in Copenhagen, Denmark. Here you can find scientists who can explain to you what to expect when you are expecting climate change, and hopefully their knowledge will help you adapt to new climatic scenario. Photographer: Anna Mazzarella

By Hlynur Bardarson
E-mail this page
>
Adaptation, what to expect, when you are expecting?