Controversial tax on fisheries profits in Iceland: an improvement to the fisheries management system?

These are exciting times to be working on fisheries in Iceland. Last weekend my bike ride to work passed by the Reykjavík harbour, filled with enormous fishing boats tied up alongside each other, claiming a record for largest number of boats in port. They were honking foghorns continuously in protest of recent legislation proposed by the Ministry of Fisheries and Agriculture, and planned to stay there the rest of the week on strike. See Iceland Review photos here:

Really? The most profitable industry in the whole country was going on strike?

Well, of course! *Suddenly*, the government is proposing a new and quite substantial tax on their fishery profits (see here for specifics). The justification is that this is a resource that by law belongs to the people of Iceland, not to any individuals or companies. So, the people should profit too.

But why enforce it now, just when the people are desperate and the fishing companies are becoming mega-profitable? Isn’t that stealing from the rich and giving to the poor? Robin Hood was a nice guy, but he was still a thief.

In a country whose economy depends on exportation, and fishing tops the list of exports, this is a very, very big deal. But to understand both sides of the debate, it is important to first gain context in a brief history of fisheries management in Iceland.

Iceland is known for having relatively effective fisheries management. It was one of the first countries to implement a harvest control rule for Atlantic cod as well as an individual quota system which was later expanded across most major fisheries. However, this early implementation also led Iceland to be one of the first countries to experience the downside of individual quota systems. For example, they have been criticized for allowing centralization of fishing rights into large companies and reducing employment opportunities in smaller towns. In Iceland, many people are also unhappy with the way the individual quotas were first distributed: as property given to boat-owners and based on the amount and kind of fishing done at the time. In the almost 20 years since then, many quota shares were sold to big companies, and newcomers to the fishing industry have found it difficult to become established.

This was why the Icelandic government finally decided to make some changes. The previous proposal that had been circulating over the past couple years was at least equally disliked. In that proposal, the government suggested slowly taking back ownership of the quota over decades in an effort to restore ownership of the resource as national. The nationally owned quota could then be rented out, allowing newcomers to become fishermen and increasing revenue to the government. The current proposal includes a similar, but much reduced, rental pool owned by the state that likely will cut down fishermen’s share of the resource, but at least they lose less of the ownership (I think…see the link above for details). Instead, government gains most revenue from taxing fishing profit on boats over 100 GRT, and boats 30 – 100 GRT at half the rate. Boats < 30 GRT are exempt, although everyone pays a base tax for owning quota.

I suppose this scheme of taxing big companies even bigger taxes is no different than giving a higher income tax rate to people with higher income (which is standard in Iceland). In addition, preliminary results from my research indicate that companies and big boats belonging them are able to use the quota system in a way that benefits them more than if they were a small single-company boat. Because a number of boats with individual portfolios of species quotas belong to a single a big company, these big companies are able to transfer quotas among boats to maximize use of rules in place that allow for flexibility in use of the quota system. These rules were meant to prevent fishermen from being penalized for not knowing exactly what they would catch, and therefore not knowing how to exactly fill their quotas without exceeding certain species. Bigger companies have a greater flexibility in using rules that allow for legally exceeding quotas, show greater quota trade volumes (as a percentage of their quota available), and are able to push more of their unused quota forward to next year. This allows them to legally land a greater percentage of their quotas over the total allowable catch than would be possible on smaller boats.

Does that mean the higher taxation on bigger boats is fair? Many people in the fishing industry don’t see why they should be forced into philanthropy for the nation. They still remember when fishing was barely profitable; it wasn’t terribly long ago (~ 30 years?). Why should they be singled out and penalized?

Some Icelanders believe that since the economic crash, people in Iceland have simply become more suspicious of government, critical of current policies, and they want profit to be fairly had. They view this as a good change, simply acting on issues that have been argued over the quota system since its inception. Not only were the fishermen protesting last weekend, Icelanders were out counter-protesting alongside them (as you can see in the pictures of the Iceland Review article above).

It is obvious to see who benefits from this arrangement: if the proposal is accepted, the government is expected to accrue around 85 - 100 million USD annually in the next three years, to be deposited in the Treasury. Part of the profits from the rental pool will be delivered into a new fisheries research and marketing fund (~5 million USD). Hopefully a substantial amount of this money will be directed toward fisheries research, since Iceland appears to spend less than many other countries on fisheries research, given the landed value of its catch (at least in 1997 – graph below was made from this report) 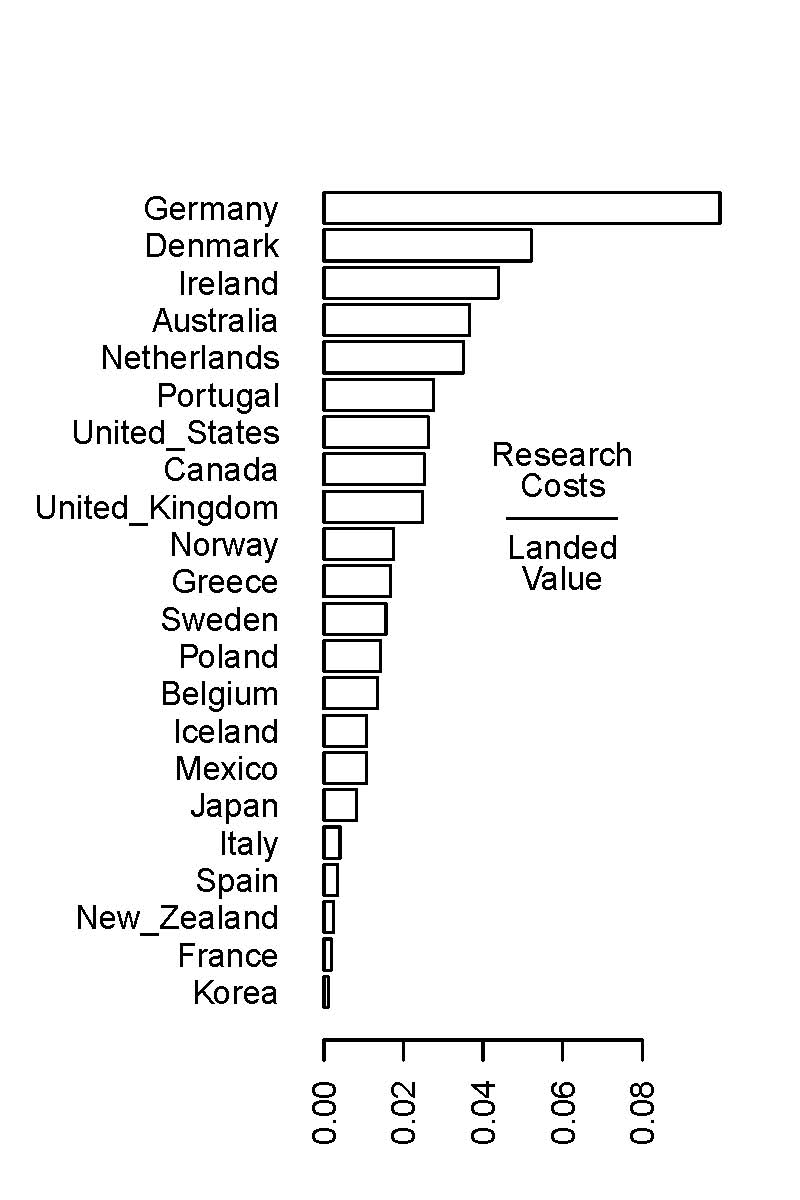 Does this profit come at a big price however? Successful fisheries management depends also on the approval of the people using the rule. If fishermen lose faith in the system, they might start ignoring the rules and not complying. If this occurs, hopefully it will not be in such a way that risks sustainability of the fisheries, as this is likely not intended by the people that directly depend on it for their livelihoods. Monitoring how fishermen use policies put into place is an essential part in the continuous development of management systems. I’ll be excited to show you some results in the future on how fishermen use rules that allow for flexibility in the use of the Icelandic quota system and how this can be used to improve adaptability in management systems, especially in the face of climate change.