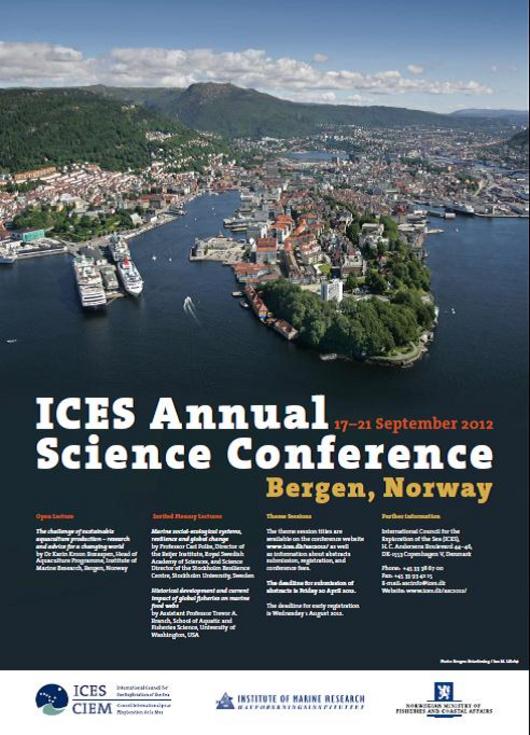 When it comes to discuss state-of-the-art science, a week is not enough. Between business meetings, plenary lectures, and awards, there is little time left for a session to cover a full day.

Bergen, the Norwegian capital of marine sciences, proudly held the 2012 ICES Annual Science Conference (ASC). There were 18 sessions spread over five full days, 3 Plenary Lectures, and several Open Sessions with fruitful overviews over the last year improvements in ICES research. The 2012 edition of the ASC was held at the Scandic Bergen City Hotel from September 17 to 21.

The very first speaker was Manuel Barange, the current chair of the ICES Science Committee (SCICOM). His talk provided an overview of the most recent discoveries among the working groups, from benthic ecology to salmon tagging databases, and zooplankton regime shifts. After lunch, science was brought to the ASC attendees through music, followed by an amusing talk by Dr. Karin Boxaspen on ”The challenge of sustainable aquaculture production – Research and advice for a changing world”. Dr. Trevor Branch hosted the Plenary Lecture of the second day, entitled ”Historical development and current impact of global fisheries on marine foodwebs”. The third Plenary Lecture was given by Professor Carl Folke on “Marine social–ecological systems, resilience, and global change”, from the Stockholm Resilience Centre, whom NorMER is proud to have as co-Chair.

Two NorMER PhD students presented at the ICES ASC 2012. Rebecca Holt held a talk on Wednesday on her current work, entitled “Climate responses in fish: temperature dependence of physiological performance, consequences for growth and population resilience” on the second day. On the following day, I, Sofia Ferreira, presented the work I have been developing during the last months in the Faroe Islands, entitled “How the Subpolar gyre strength influences phytoplankton blooms dynamics in the North Atlantic”.

From all the sessions, I attended 7 of them, covering subjects as “The role of the Arctic and Subarctic in a climate change perspective” (session M) or “Mapping and modelling of planktonic ecosystems for better monitoring and future projections of responses to global change” (session R). From the 84 talks I attended, 8 were what I considered outstanding science, namely the ones from Dr. James Keating, Dr. John Brunn, Dr. Charles Greene, Dr. Leif Nøttestad, Dr. Anne Hallowed, Dr. Trond Kristiansen, Dr. Marie-Fanny Racault, and Dr. Høgni Debes. Their projects provide both an insightful overview of the marine ecosystems and clean research plans that I believe to be essential when assessing such vulnerable resources.

The conference dinner was held on Wednesday, September 19, at the Bergenhus Fortress. The medieval setting made for an enchanting evening, where short plays were performed. However, there were still two days of the ASC to attend, and soon everyone was leaving the building with a delightful memory of Bergen ancient history.

A new approach of the 2012 edition – which I think is worth mentioning – was the ICES ASC application for smartphones and tablets. This app allowed the participants to get an updated programme and make up their own schedules. The ASC aims at becoming paper-free in a near future and the app emphasized how useful and convenient new technologies can be within research.

In the end, the sun was shinning, ideas were developing, and minds were floating with new insights. Bergen left us with a remarkable conference in our memories and a promise of a great ASC in 2013 in Reykjavik.