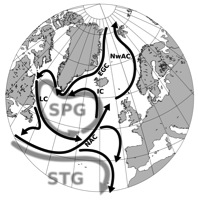 The current rate of change in the climatic conditions is faster than ever [Hoegh-Guldberg et al 2007, IPCC 2007]. This is mainly due to the impact of disturbances in the weather patterns that are now higher. The North Atlantic (NA) has a central role in climate change for it may be where everything starts. From the deep-water formation to the melting of the ice, the physical conditions are responsible for the transferring of heat around the globe [Hátún et al 2005]. For this reason, most of the indicators of climate change are based on indices calculated simply using physical forcing over the NA.

One important feature found in the NA is the circulation of water masses, i.e. currents that influence the environmental conditions that may ultimately affect the marine ecosystems all over the world. The cause for these oceanic currents is largely related to wind movements. An oceanic gyre is thus the term used to refer to any vortex in the sea. In the NA, the subpolar gyre (SPG) is composed by four main currents: The Irminger Current (IC), the East Greenland Current (EGC), the Labrador Current (LC), and the North Atlantic Current (NAC, the only warm current of the four, Figure 1). Thus, when the SPG is strong, there is an eastward shift of cold, fresh waters, as a branch of the NAC peels off into the Rockall Plateau (RP, Figure 2). Conversely, a weak SPG allows subtropical waters to extend north and west, spreading warm, saline conditions over the RP [Hátún et al 2009a]. Therefore, the SPG index (calculated from altimetry) is used as an indicator of the climatic forcing over the NA [Hátún et al 2005, Hátún et al 2009b, Häkkinen and Rhines 2004].

The extent of the impacts of the SPG can go as far as the Barents Sea [Hovland et al 2013]. Additionally, changes in the SPG patterns have been actually observed from primary productivity all the way up to whales [Hátún et al 2009b]. This confirms how much the atmospheric forcing can influence the marine ecosystems in the NA. The strength of the SPG, i.e. the extent of the cold, fresh waters over the RP, is the key feature generating the ecological changes. For instance, the weakening of the SPG in 1995 lead to a northward shift of fish populations in the NA continental slope. In addition, the dominance of warm, saline waters may enhance local conditions for fish growth.

One may argue that there are enough too many indicators for climate change in the NA. The most widely used example is probably the North Atlantic Oscillation (NAO, i.e. the difference in sea level pressure between the Iceland low and the Azores high [Flatau et al 2003]) over an even wider range of organisms [Lohmann et al 2009]. However, what some scientists miss to acknowledge is that the reliability of the NAC as a climatic indicator is currently questionable. The reason for this is that, since the 1990’s, there has been a decoupling between the NAO and the Polar Vortex, which decreased its power to explain the ecosystems processes [Hátún, personal communication].

Even though one cannot directly link the SPG to ecosystem functioning, the triggers shaping the SPG strength may be the same that trigger climate change. In other words, the SPG and climate change may have the same causes, therefore making the former a suitable indicator for the latter. In conclusion, the SPG should be more used in climate change studies, especially those focusing in the NA. 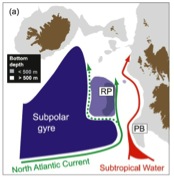 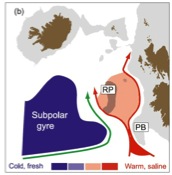 Hoegh-Guldberg, Ove and Mumby, PJ and Hooten, AJ and Steneck, RS and Greenfield, P and Gomez, E and Harvell, CD and Sale, PF and Edwards, AJ and Caldeira, K and others. 2007. Coral reefs under rapid climate change and ocean acidification. American Association for the Advancement of Science. 318(5857): 1737—1742.