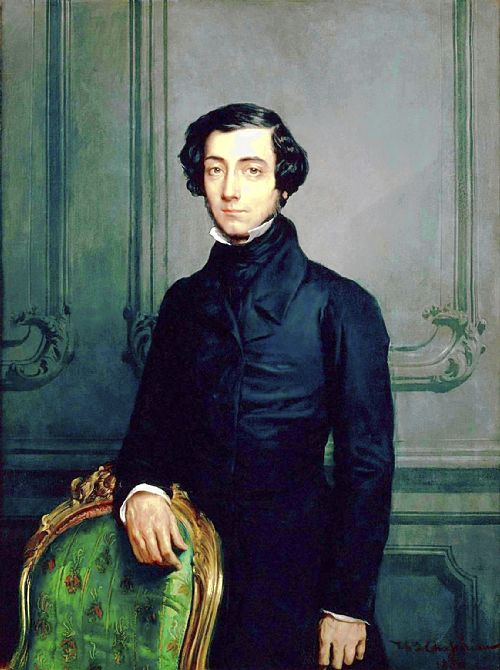 Portrait of Alexis de Tocqueville in 1850 by Théodore Chassériau.

For my previous blog I discussed the importance of habits as causes for the different ways in which fishers fish. Some consider these non-economic motivations for fishing behavior as ‘black-box variables’, which I also referred to in the title of the previous blog. But how black is this box really?

Of course many social science studies explaining the origin and dynamics of fishing and fisheries exist. Insights can be gained from specialized fields such as Maritime History (Bolster 2006), or Maritime Anthropology (van Ginkel 2005). But even from the classic works in social science we can learn a lot. In this blog I would like to discuss some insights that I gained from reading the first volume of ‘Democracy in America’.

‘Democracy in America’ is an old, thick book consisting of two volumes written in 1835 and 1840, by the French aristocrat Alexis de Tocqueville. Tocqueville compares American with French society to better understand the workings of democratic societies. The book is considered a classic work in Sociology and Political Science (Elster 2009a). In a chapter titled ‘Some considerations on the causes of the commercial importance of the United States’ Tocqueville wonders why American sailors can transport their shiploads against lower costs compared to their European counterparts. He claims that the difference in costs cannot be explained purely from “material advantages” (Tocqueville 2004 [1835/1840]: 463-467 – all quotes from Tocqueville in this blog are taken from these pages). American vessels are not better constructed - they do not even last as long as European ships - and they cost as much to be constructed due to the high labour costs in the USA. Furthermore, the wages of US sailors are also higher compared to wages in Europe. This leads Tocqueville to conclude that the difference in style of working between European and American sailors comes from “purely intellectual and moral qualities”. Here is the explanation in Tocqueville’s own words:

“The European navigator is cautious about venturing onto the high seas. He sets sail only when the weather is inviting. If an unforeseen event occurs, he returns to port. At night he partly furls his sails, and when the ocean turns white with the approach of land, he slows his course and checks the sun. The American neglects these precautions and braves these dangers. He sets sail while the storm still rages; by night as well as by day he spreads his full canvas to the wind; he repairs his storm-damaged ship while still under way; and when at last he comes to the end of his voyage, he continues to make for the coast at full speed as if he already had his port in sight. The American often ends in shipwreck, yet no one else plies the seas as rapidly as he does. By doing what others do in less time, he cuts his costs. Before reaching the end of a lengthy voyage, the European navigator feels that he must put in at several ports along his route. He wastes precious time searching for ports of call? or waiting for opportunities to leave them, and he pays every day for the privilege of staying. The American navigator sets sail from Boston to buy tea in China. He lands in Canton, stays there a few days, and returns. In under two years he has traveled the circumference of the globe and seen land only once. During a crossing of eight to ten months, he has drunk brackish water and lived on salted meat. He has battled constantly with the sea, with disease, and with boredom. But upon his return, he can sell his tea for a penny to a pound less than the English merchant: his goal has been achieved.”

To be sure, the qualities mentioned in the above quote do not just refer to a difference in “calculation”, i.e. weighing costs and benefits, but are rooted in “the dictates of his nature”. It is here that Tocqueville integrates this example of sailing into his larger study about the social origin and dynamics of democracies. What causes the American working style can be understood when one takes into account the social conditions that shape individual habits and behavior. According to Tocqueville Americans in the mid-1800s are born into a society that socializes them with all the modern needs, desires and habits typical of any European society of that time. But the relatively young American society has not yet developed all the institutions that can satisfy these individual needs and desires. The Americans, in other words, cannot rely on organizations and institutions for the fulfillment of their needs; they have to do it themselves. As a consequence the Americans become typical jacks-of-all-trades. Tocqueville remarks that on his journey through America he talked with people “who have been in turn lawyers, farmers, merchants, ministers of the Gospel, and physicians”.

The downside of these all-round working habits is that they impede a division of labor, and therefore industrialization, but, on the other hand, they also act as a source for innovation and on-the-spot improvisation: “[…] there is virtually no line of work that is entirely unfamiliar to [an American]. His capabilities are more general, and the range of his intelligence is wider”. Since the Americans have learned to do many things, they are not afraid to try out new things, to enterprise, and, most of all, to take a risk. In Tocqueville’s words the American “soul” is always in a state of “febrile agitation”, i.e. always on the look out for new improvements and ready to try them out. Moreover, this state of being, or “spirit”, is also spilling over into the not-yet-fully-developed institutions of American society. In other words, these individual habits and state of minds institutionalized and in so doing constituted American society. Through institutionalization these habits are reproduced and sustained since people are socialized in these collective ways of acting, thinking and feeling. This reinforcement between individual behaviour and institutionalized habits lies behind the American style of sailing and maritime commerce: “It is this same spirit […] that drives the American to make speedier, more economical voyages than any of the world’s other traders”.

This brief example from ‘Democracy in America’ nicely illustrates that we still can learn from the classics. What can be learned is not so much factual information about, in this case, practices of maritime commerce during the 18th century, instead these classic works often include analyses and arguments with a sharp eye for the complex interrelations between social, psychological and environmental explanations (Elster 2009b, 27). Classic social scientists, such as Karl Marx, Sigmund Freud, or Norbert Elias were much more all-round scholars than most contemporary social scientists that are trained in specialised fields, such as political science, economics, sociology, or psychology. This is why the breadth and complexity of classic works can still“stretch the mind” (Stinchcombe 1982, 355) and teach novel ways of looking at familiar things. An insight that stands out in Tocqueville’s analysis is the importance of habits – so not just ‘calculation or means-ends rationality - as driving forces for human behavior. Remarkably most efforts in 20th century social sciences would be devoted in understanding the latter at the expense of the former (Camic 1986). Moreover, Tocqueville also stresses that habits origin from socialization, i.e. from being brought up in families, communities, and societies. With this argument Tocqueville anticipates later ideas about the creation and reproduction of societies through the feedback between social structures, or institutions, and individual behavior and agency (Giddens 1984).

Right now I am in the middle of volume II of Democracy in America. Who knows, there might be more interesting stuff, perhaps for another NorMER blog…

Elster, J. 2009b. Reciprocity in Seneca and Smith. Paper for the conference on The Theory of Moral Sentiments, Oslo.