Lindholm navigates the floating fish chamber next to our boat.

I have been working with the salmon fishery and its interaction with the seal conservation without any practical experience of the profession, nor without any live contact with seals. This many times happens for theory driven scientists, such as environmental economists, who mainly interact with the computer screen in the safe surroundings of the office. Luckily, in June we had a nice opportunity to get in touch with the fishing scene with the young researchers from our department, since a fisherman, Mikael Lindholm, invited us for a fishing trip to the Gulf of Finland.

Our trip began at the sea side, where we got to see a seal-safe trap net ashore. This type of fishing gear is a huge construction of nets, wires, and circular aluminum frames, which make the gear seal proof. The size of the gear surprised me; it did not look so big on paper! Although big, the gear is easy to handle compared to its’ big brother, the traditional trap net, which have become less used nowadays because they are prone to seal-induced catch losses.

The fish chamber is circulated with pontoons, which are inflated with the help of an air compressor to raise the gear above the sea surface. This allows a fast emptying of the gear; it takes only few seconds to take the fish out of the gear, once the gear is up. Emptying the traditional gear may take up to two hours, thus the ease of fishing with the new seal-safe gear is overwhelming.

The fish chamber is equipped with a trap door and a chute, which make emptying the gear easy.

Next we headed to the sea. We got to enjoy the skills of our experienced skipper, while the boat was jumping from the top of one wave onto another. After a 20 minute rollercoaster like boat trip, we reached the first trap. In about 30 seconds Lindholm took the gear up above the sea surface with the help of an air compressor. The fish were already jumping in the fish chamber, and once Lindholm navigated the gear next to the boat, he opened the trapdoor, and some 15 big fish came sliding down to the boat with great force.

Lindholm navigates the floating fish chamber next to our boat.

Among the catch, there were only few undersized young fish, which were released back to the sea. The rest were salmon and trout, weighing at least 10 kg each. This was a good catch, especially around the midsummer festivities when Finns tend to eat a lot of fish.  There were still three other traps, but because of the direction and speed of wind we did not have a chance to empty them. This was no problem, because the seal-safe trap is constructed so that the fish do not get entangled to the nets, but are alive in the trap, which means that the catch stays fresh a longer time between emptyings. According to Lindholm the catchability of the trap nets is highly dependent on the direction of wind and the temperature of water, what is of course very interesting considering how climate change will affect the fisheries in the future. If the water temperature is beyond 19°C, salmon move to the lower depths, where the fish are out of reach for the trap nets, which are placed just below the surface of water.

A floating fish chamber, followed by approximately 100 meters of nets leading the fish into the fish chamber.

Our fisherman, Mikael Lindholm, has been actively participating in a research project, which studied the temporal and spatial behavior of grey seals using satellite telemetry. He participated in the live-capture of seals and in equipping the captured seals with satellite devices. The study (Lehtonen, Oksanen, Ahola, Peuhkuri, and Kunnasranta [2012]) shows that the foraging areas of seals range from 2200 – 11 200 km² depending on the time of the year, which highlights the fact that seal management has an international dimension in the Baltic Sea, although many of the management measures such as hunting quotas are set by nations independently at the moment.

Another research project Ecoseal studies the connections between seal management and fisheries, and Lindholm has been helping with collecting samples for the studies on seal diet (http://www.ecosealproject.eu/Work_packages/Diet_of_seals_/). Samples are collected from by-caught and hunted seals. In fact, we also got to see some sampling; we saw a young grey seal that had been caught in a trap net, and had been shot dead to provide material for research. We were wondering whether it is possible to study seal diet by non-lethal means, but apparently it is not possible.

A young grey seal was caught as by-catch, and will be used for research purposes. ¨

After landing with the shaky feet, we were served smoked salmon, coming straight from the oven. It tasted completely different than the usual frozen Norwegian salmon we get in our supermarkets! After tasting the fish we ended up buying some kilos of fish home as a present. Few days after our visit, I got a call from Lindholm. He told that there were a lot of fish also in the other three traps, he was happy with the catch, because before midsummer festivities there was usually more demand than supply. He also told that in one of the trap there was again a young seal inside the trap. However, this time he decided to set her free, so there were no casualties for the sake of science this time! 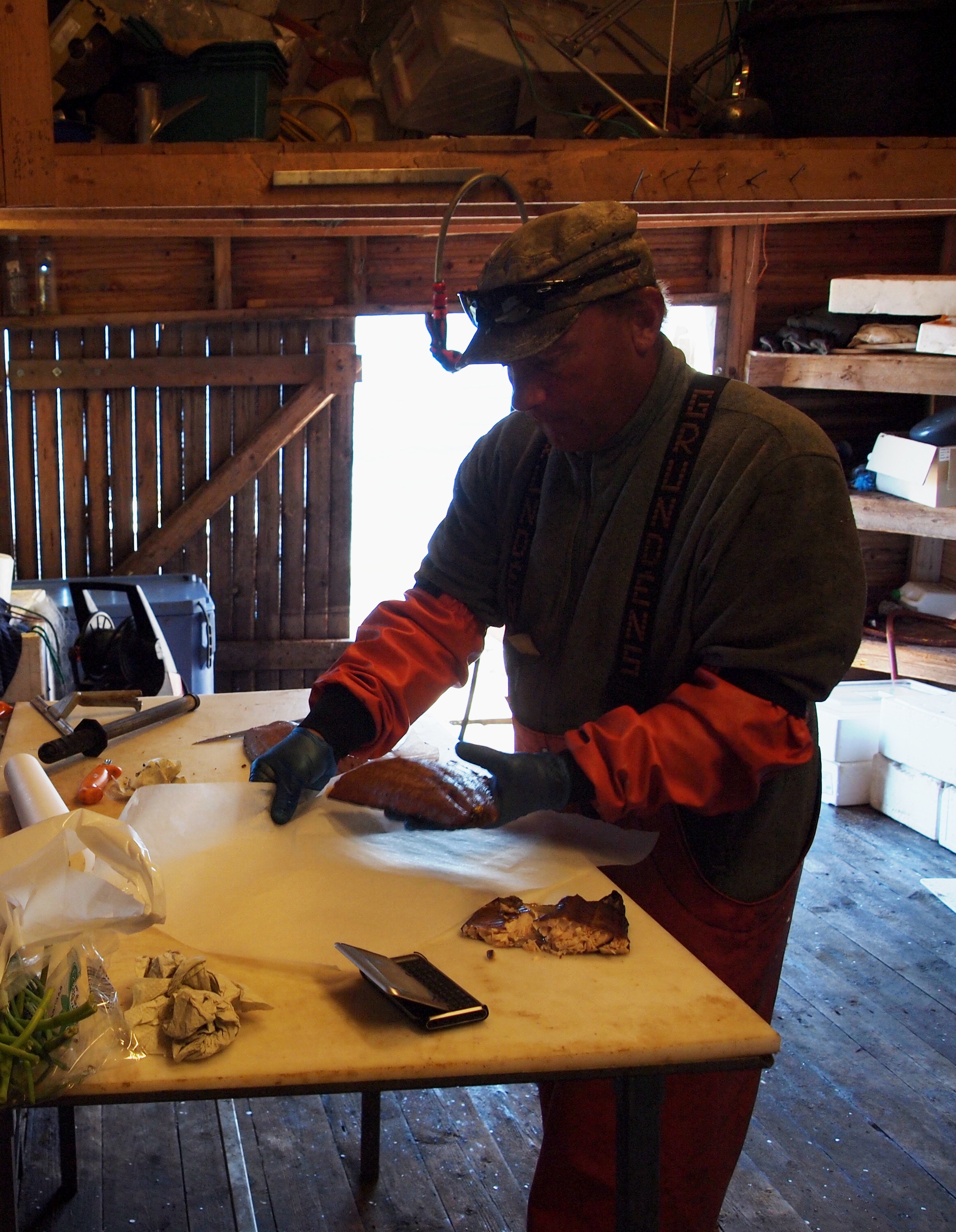 Something delicious to bring home.