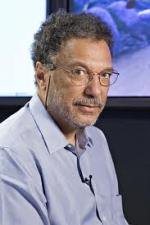 Dr. Daniel Pauly is a French citizen who completed his high school and university studies in Germany; his doctorate (1979) is in Fisheries Biology, from the University of Kiel. After many years at the International Center for Living Aquatic Resources Management (ICLARM), in Manila, Philippines, Daniel Pauly became in 1994 Professor at the Fisheries Centre of the University of British Columbia, Vancouver, Canada, and from 2003 to 2008, its Director. Since 1999, he is also Principal Investigator of the Sea Around Us Project, funded by the Pew Charitable Trusts, and devoted to studying, documenting and promoting policies to mitigate the impact of fisheries on the world’s marine ecosystems (see AMBIO, 34: 290-295, 2007).  The concepts, methods and software Daniel Pauly (co-) developed, documented in over 500 publications, are used throughout the world – especially the Ecopath modeling approach and software and FishBase, the online encyclopedia of fishes. This work, which increasingly includes climate change issues, covered in close collaboration with his colleague William W.W.L. Cheung, is recognized in various profiles, notably Science, April, 2002; Nature, Jan. 2003; New York Times, Jan, 2003, and by numerous awards, among them the International Cosmos Prize, Japan (2005), the Volvo Environmental Prize, Sweden (2006), the Excellence in Ecology Prize, Germany (2007), the Ramon Margalef Prize from the Government of Catalonia (Spain, 2008), the Grand Prix 2011 of the French Ecological Society (2012), and the Nierenberg Award for Science in the Public Interest for the Scripps Institution for Oceanography, California (2012).